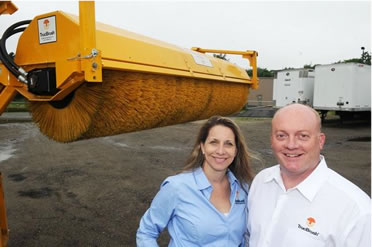 In 2012 Jim Burns had a solid business growing as the owner of Fairway Lawn Care in South Easton and Plymouth, when a customer asked if he knew of a solution for clearing snow off the tops of trucks.

A year later, he started a second company based on his answer to that question – an invention called TrucBrush.

“Prior to the TrucBrush, companies had drivers climbing rolling ladders and then shoveling the snow off the top of their trucks,” said Burns. “Trucks are about 15 feet-high then add bad weather, it’s dangerous. Drivers aren’t hired to do snow removal.”
Burns said trucking companies spent up to 60 labor hours on clearing the tops of trucks. His invention, which attaches to the front of any commercial loader, clears the top of a tractor trailer in one minute and a box truck in 30 seconds, and an entire fleet in 45 minutes, he says.

The invention now has a U.S. patent, and the company’s marketing has gone national as well, with Vice President Debora Babin Katz, 49, of Duxbury, on the road, literally, explaining and demonstrating the equipment at trade shows and client facilities.

“It was through participation that I became more involved with the Women In Trucking Association, and was recently asked to become a board member of the Women In Trucking Foundation which raises and distributes scholarships to help women further their careers in the trucking industry,” she said.

TrucBrush offers to either provide the snow-clearing services, or sell the equipment directly to the client.

Katz also said they’ve not only sold TrucBrushes to snow service providers, but also to trucking companies like Boston Trailer who do their own snow removal.
The TrucBrush was engineered with heavy gauge steel that looks like an arm. The arm extends from a commercial loader and holds a polypropylene bristle brush the width of the truck. It’s rotating bristles clear snow in a sweep.

The TrucBrush sells for $24,000. Burns said that they put a lot of thought into the pricing.
“The machine’s shelf life is 10 years,” he said. “It breaks down to $2,400 a year. A lot of equipment we buy at Fairway is in the $24,000 range. Companies that have a TrucBrush will offer a new service, and will have a new revenue stream.”

“We introduced the service to multiple sites this past winter,” said Burns. “We think it’s going to increase our snow business dramatically and bring us to places we’ve never thought we would be. We’re negotiating with a very large company on providing the service across the snow belt in multiple states.”

Katz, whose background includes years as a marketing, communication and business development consultant primarily in the commercial snow industry, has been a part of the TrucBrush story from the start.

“I … handle many facets of the company besides marketing, including business development, sales, customer service, manufacturing and engineering coordination, budgeting, blogging, and on and on,” she said.

“I took this position specifically to bring TrucBrush to fruition so I was involved from the very early stages working with Jim and the team of engineers on the invention, modifications, testing it, finding a manufacturer, and then developing a methodology for the implementation of TrucBrush at trucking terminals and distribution centers.”

Burns credits both Fairway and TrucBrush’s growth to his client-driven approach.

“We spend a lot of time listening to clients,” said Burns. “We want to know what we do well and what can be improved. Listening to our Fairway client is why TrucBrush was born.”